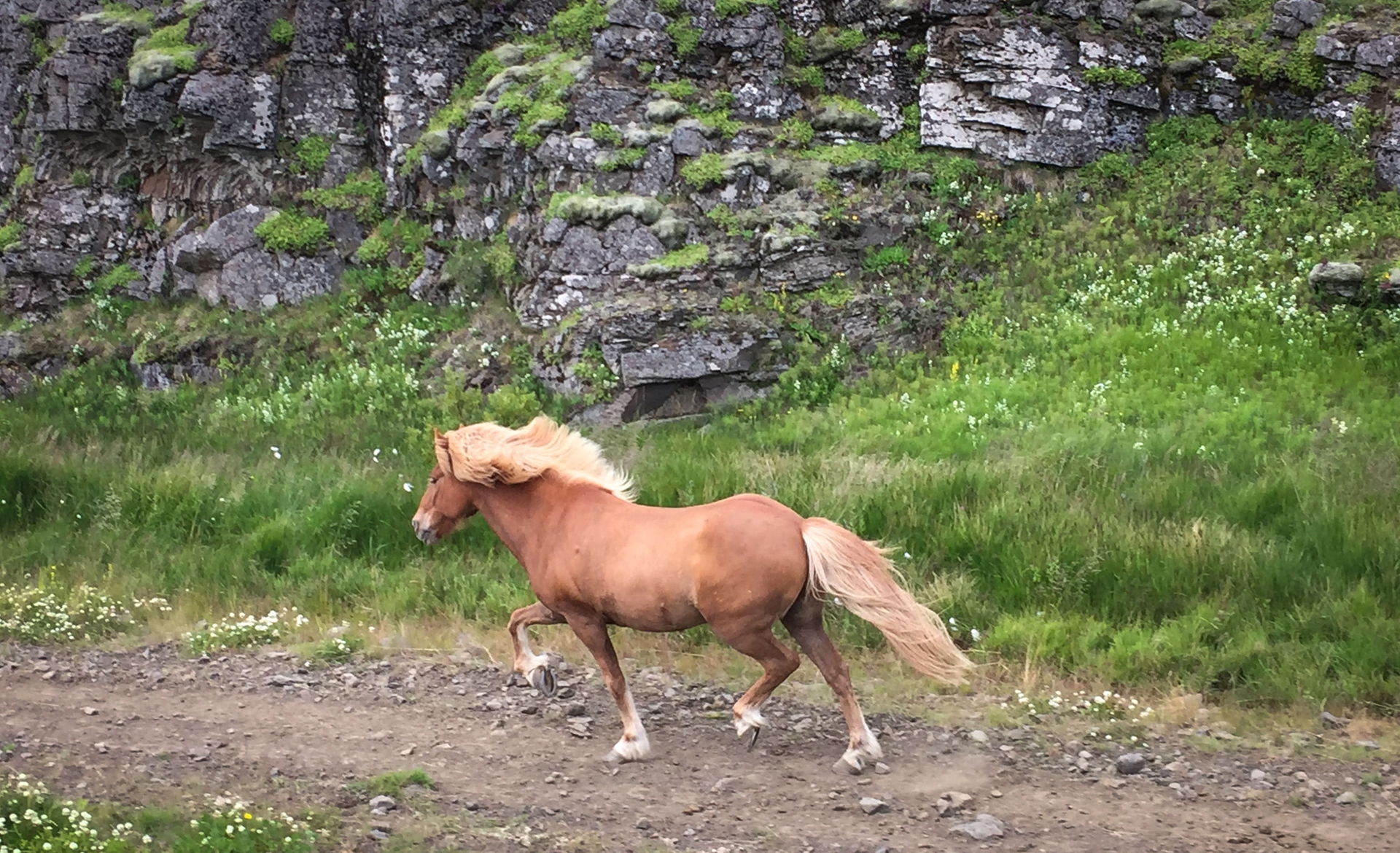 Iceland is one of the hottest destinations for world travelers right now. This summer, I decided it was time to pay the country a visit to see what everybody was talking about. And it was incredible, from the vibrant green hillsides and vast lava fields to the soaring waterfalls, steaming geysers, and crystalline glaciers. The country’s majestic natural spaces are sparsely populated, with tiny towns and fishing villages few and far between outside the capital city of Reykjavik. But wherever we did encounter locals, smiling faces greeted us (tourism helped Iceland recover from its recent recession, so visitors were very much welcome). Read on to learn more about my trip, and recommendations!

How long should you spend in Iceland? Based on our travels, five to seven days should allow ample time to see the best of the country. I recommend three nights of driving around the south, then two nights in Reykjavik enjoying shops, restaurants and activities close to the city; for instance, a boat ride from the harbor to see puffins and whales. Then spend two nights on the Snæfellsnes Peninsula, wandering about fishing villages and volcanic fields. Some other must-see highlights:


Waterfalls: Iceland must have the highest number of awe-inspiring waterfalls per square mile of any country in the world. The most well-known is probably the multi-tiered, 105-foot-tall Gullfoss, located 68 miles inland from Reykjavik. We also paid a visit to Skógafoss, near the country’s southern tip (and climbed the 370 steps running alongside up to the top for a sweeping view of the southern coastline); Hjálparfoss, a two-stepped waterfall near the confluence of the Thjorsa and Fossa Rivers; and Seljalandsfoss, a 197-foot cascade on the Seljalands River that originates at the Eyjafjallajökull glacier volcano.

Glaciers. There are many worth seeing! Snæfellsjökull, a 700,000-year old, 4,744-foot-tall glacier in western Iceland, sits atop an active volcano within a national park. Jökulsárlón Glacier Lagoon borders Vatnajökull National Park in southeastern Iceland, and you can take a boat ride out to see icebergs calved from the Breioamerkurjökull Glacier (as we did; below).

Thermal springs. Gunnuhver is a highly active geothermal area of mud pools and steam vents on the southwest end of the Reykjanes Peninsula. Temperatures in the ground can reach 300°C (570°F), and the terrain resembles a steamy, bubbling moonscape (the waters are more hospitable at the nearby Blue Lagoon Geothermal Spa). At Geysir, northeast of Reykjavik, you’ll find boiling mud pits and exploding geysers, including the famed Strokkur, which spouts water 100 feet into the air every few minutes.

Churches. The most photographed church in Iceland is probably the rocket-shaped Hallgrímskirkja in downtown Reykjavik, but the country’s tiny village churches are beautifully picturesque. The most iconic is Búdir Church, a black church built in 1848 for the hamlet of Búdir, which lies in the Búðahraun lava field, on the westernmost tip of the Snæfellsnes peninsula.

Wildlife. Atlantic puffins form breeding colonies in coastal areas during the spring and summer. Some of the best areas to see them include Látrabjarg in the west, Dyrhólaey in the south, and Ingólfshöfdi in the Westman islands. Summer is also the prime viewing time for whale species such as minke, fin, blue, humpback, sperm, and orca. Another species of inhabitant you’ll spot as you traverse the countryside is the Icelandic horse. These stout, bushy-maned horses, bred only Iceland for the most part, can be seen all over the island, and they make incredible photo subjects against a backdrop of volcanic mountains.

Museums. The Lava Centre, in Hvolsvöllur, is a brand new, interactive, high-tech educational exhibition depicting volcanic activity, earthquakes, and the creation of Iceland over millions of years. Iceland Erupts (below), at the Hvolsvöllur Þorvaldseyri Visitor Centre, opened one year after the start of the Eyjafjallajökull volcano eruption in 2010 by a farmer whose property is right at its base, features a video and display on Iceland’s volcanoes, from the days of the Vikings to recent years. For something completely different, The Phallological Museum in Reykjavik displays a collection of more than 200 penises and penile parts belonging to almost all the land and sea mammals found in Iceland.

I had two choices for getting around the country: a self-drive trip or a small-ship cruise. Both Windstar Cruises and Tauck Tours offer great small-ship cruise options, presenting an opportunity to see dramatic scenery from the water and get beyond the tourist hot spots to remote fjords, soaring waterfalls, and tiny fishing villages – usually during a week-long circumnavigation. In the end, however, I chose to do a self-drive tour, because I wanted to see the country’s interior and check out the quality of hotels along the way. We planned our trip with a tour operator in Iceland, who provided a tablet with an itinerary pre-loaded, and all of the important sights highlighted.

The driving was easy, because we were on the same side of the road as in North America, and there was usually very little traffic. (Side note: it always amazed me how few cars we encountered on the road, yet when we arrived at an attraction, the parking lots were always packed – where did all of these vehicles come from?) There were so many sites to see along the way, from tiny wooden churches and glaciers to lava rock fields. We usually only had to drive 20 or 30 minutes before we noticed another sight to check out on the tablet.

There are no five-star hotels in Iceland at all, but we found some great four-star options, many offering wonderful character and beautiful views (in most cases, we found it best to upgrade from the entry-level rooms to the hotels’ premium offerings). In Reykjavik, I recommend staying near Austurvöllur, the city’s main park square (Hotel Borg, Apotek Hotel). However, the Reykjavik hotels seem to attract locals and visitors who like to party, and we found the noise levels high in town (we were woken up most nights).

Outside the city, these are the hotels I recommend based on my research:

Hotel Búdir: a comfortable spot on the Snæfellsnes Peninsula, in west Iceland, near the famed Búdir Church. Remote and charming, with a gourmet restaurant.

Hotel Rangá: a log-cabin-style property located in the countryside between Hella and Hvolsvöllur, about an hour southeast of Reykjavík. There are 51 rooms and suites, as well as an acclaimed riverside restaurant, three outdoor hot tubs heated by geothermal energy (perfect for viewing the Northern Lights September through April), and an observatory for stargazing.

Hotel Húsafell: a modern property on a former farm that boasts 48 luxurious rooms and suites. A great base to explore nearby Langjökull glacier, the highlands, and Snæfellsjökull National Park.

Iceland had some of the most expensive restaurants we had ever eaten at, anywhere in the world. Average entrée prices were $38–$47! But the food was incredible; especially the fish and lamb. Iceland also had some of the best bread I have ever eaten – perhaps due to the fresh, natural mineral water that is available everywhere. Some of the best restaurants we tried were those at the four-star hotels listed above, with creative chefs offering inspired cuisine.


Two other Reykjavik favourites were Grillmarkadurinn, which serves elegant farm-to-table fare inspired by traditional Icelandic dishes, and Fiskfelagid, which features a mix of Icelandic and world cuisine.